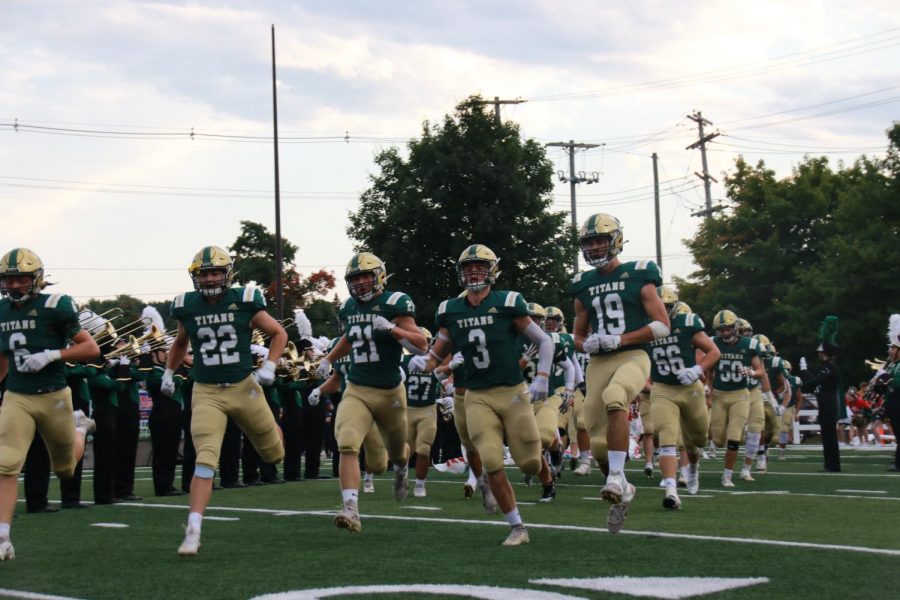 On Friday, Sept. 17, the stands of Thirlby Field were packed with students and community members to watch the cross-town rivals, West and Central, face off on the football field. Last year, due to COVID-19, there were no spectators except for players’ families. The return of the big game created a buzz around the school. Many students were excited to watch it from the student section.

The week leading up to the Patriot Game, according to senior Kale Cerny, the team had their best practices and stayed focused, which meant no messing around.

“I think the energy at practices, especially this week when we have the Patriot Game coming up, the energy is just so much higher. We come into practice and we’re all louder and rowdier,” Cerny said.

Despite the students and community excitement for the game, players on the varsity football team felt the nerves build up and the anticipation set in before stepping onto the field. Senior Will Gaston, a wide receiver, has been playing football since the third grade. Although Gaston has been playing for nine years, the Patriot Game was the first time he has played in front of this large of a crowd.

“Right now, I’m a little nervous [for the game],” Gaston said. “But, then I feel like when we are warming up and everything, I’ll be even more nervous seeing thousands of people in the crowd. [It’s] pretty different.”

Even though junior Madalen Ferrill wasn’t on the field playing, she can understand why the boys might be on edge for the popular community event, especially since for many of them it is their first time playing in the Patriot Game.

“Last year they didn’t have a crowd, this year the pressures on. They got all of us here,” Ferrill said.

Cerny, who plays right tackle on offense, also felt the strain of the game like Gaston. Although he may have felt some nerves, Cerny didn’t let the pressure of the game weigh him down and focused on what matters: the game and the game only.

“It’s all built up. The first snap of the football you’re playing the game again and you’re focused. Everything outside the game is gone,” Cerny said.

The final score of the game was 14-42, with Central in the lead. Although West lost, the team held their own for most of the game against Central.

“I don’t think the score really was the outcome of the game, not what it felt like,” Gaston said. “It felt like a much closer game until the last couple of minutes, they scored a couple of times.”

Regardless of the score, the boys did not give up. The team took this experience and learned what they need to focus on and do better for the next game.

“We obviously didn’t want the outcome to be what it was, but we definitely fought hard, right to the end,” Gaston said.

Even though Gaston wasn’t able to beat Central this year at the Patriot Game, he’s determined to get back at them this winter.