“Peter Pan and Wendy” Takes the Stage at West 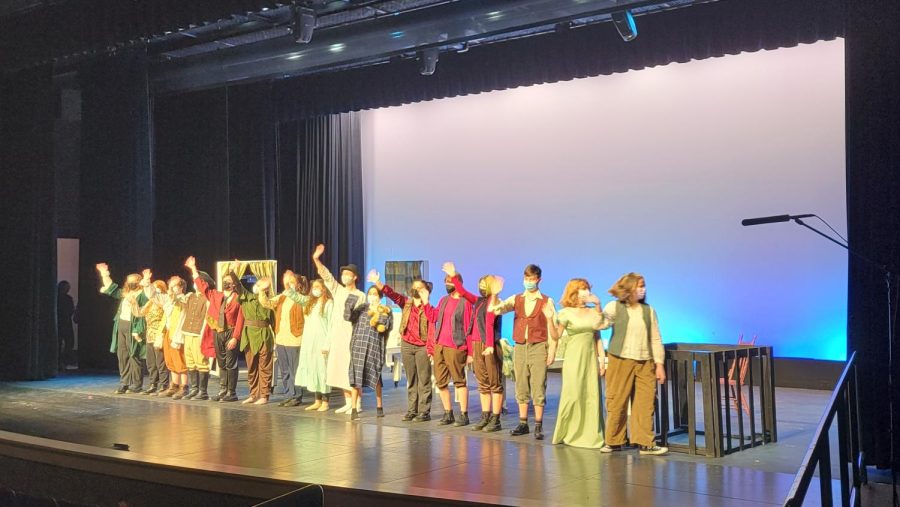 It was over a century ago in 1904 when Sir James M. Barrie’s “Peter Pan” first took the stage in London and since that time, Neverland has touched the hearts of children and adults alike, whether they slip eagerly into the dramatic adventures of childhood or wait dutifully with Mrs. Darling by the unlatched window. The theater department has told a story similar to this before quite recently, in the form of the 2004 imagined prequel “Peter and the Starcatcher,” which was performed at West in March of 2020. However, while modern reimaginings of this breathtaking story have their own charms, they will never quite be able to reach that part of our souls where Peter’s first laugh echoed off the rafters of the Darling nursery.

This production of “Peter Pan and Wendy” held no promises of flawlessness. Prior to the show’s beginning, the production’s student director revealed that a series of absences from various members of the cast and crew over the past few months have made it nigh impossible for a full rehearsal to occur. With that, the entire week leading up to the two performance nights (Jan. 14-15) was online-learning due to staff shortages. After such a rocky week, there was uncertainty on whether the play was even still on. Yet, on it was, and of course our theater prevailed against these challenges.

There are so many things I might say about this performance that it is difficult to determine where to begin. First, I suppose we must acknowledge the similarities to the original. Like Barrie’s first production, George Darling and Captain Hook are played by the same actor (in the case of West’s performance, Xander Shumaker) which may be meant to symbolize a complicated viewpoint Wendy may have of her father or to an implication for the dreaded “it was all a dream” cliche. Peter Pan was also portrayed by a girl in our school’s production (played by Kaylee Niezgoda) which has been more or less a tradition throughout the play’s history.

Primary differences in casting are that in our school’s production, Tinker Bell was portrayed by a living actor (played by Abby McClure) while in many stage adaptations she is merely a ball of light and a faint jingling sound. Though some may find it troublesome to have a real person portray Peter’s fairy companion due to obvious height disparities, I found it to be an excellent decision. As a lover of the 1911 novel “Peter and Wendy,” I greatly appreciated McClure’s ability to portray Tinker Bell’s unique mannerisms and emotions, adding important character developments that would’ve been lost if she were a mere light flitting about Peter’s aura.

Another difference to the original was Nana’s being portrayed by an actual dog, rather than an actor. This decision I can see being met with more criticism, for Nana, while a dog, is meant to have anthropomorphic qualities that were unable to be relayed by an inhuman actor. This is a mild criticism, of course, for having a real dog certainly expands the story’s realism and brings the audience just a little closer to the magic that sparked the Darling nursery. Not that they needed the help, of course. The portrayal of these age-old characters from our students brought its own magic to the theater this past weekend.

In the original tale of “Peter Pan,” our main character is not as loveable as reminiscence make him seem, perhaps because too many people recall Disney’s 1953 animated feature. Peter is arrogant, selfish, careless, and murderous. In spite of the whimsical adventures the children partake in, the novel’s regards to Peter’s mindless killing and forgetfulness toward Wendy can sometimes paint him in as sinister a light as Captain Hook. But, Niezgoda’s portrayal of the character really struck that Peter’s senselessness was just that of a child rather than a villain. He was eager and exuberant and plenty rash, yet somehow charming all the same. In fact, the portrayal of all of the Lost Boys and the Darling children accentuated their youth in a brilliant fashion. After all, Neverland is a place for children and it certainly contributed to removing the audience from the theater for a brief time, which surely is the goal of all stage productions.

From a first glance, it may seem like the cast had been overacting, speaking loudly and enthusiastically, often more to the audience rather than other characters. However, I would argue that this is a perfect channeling of youth and serves to remind the audience that we are watching a recount of childhood. After so many new adaptations and changing perceptions of Barrie’s world, it can be difficult to remember that the roots of “Peter Pan” are not harsh reprimands or serious analyzations of these beloved characters. Rather, it is a call-back to nonsensical games of childhood. As the closing narration dictates, children are heartless. But, they are children and perhaps that is why we love them.

I do feel I should acknowledge Shumaker’s performance in particular. Though he didn’t portray one of the children, his performance was over the top in a way which many childish villains are portrayed and was reminiscent of not only the original novel, but also the animated portrayals of Mr. Darling and Hook in the Disney feature. In short, from the first moment he stomped onto stage, raging about his tie, I knew this was a good show.

Our school’s “Peter Pan and Wendy” had to struggle against many external conflicts, such as the new mask mandate and temporary online-learning. Yet, for that brief time in the theater, the audience was brought back to Neverland, back to riding the backs of clouds, dueling with menacing pirates, and tramping along with Peter, Wendy, and the Lost Boys. There it all was, just as we had left it, “though we shall land no more.”