Life in the Fast Lane: Tritons Celebrate Their Victory at States 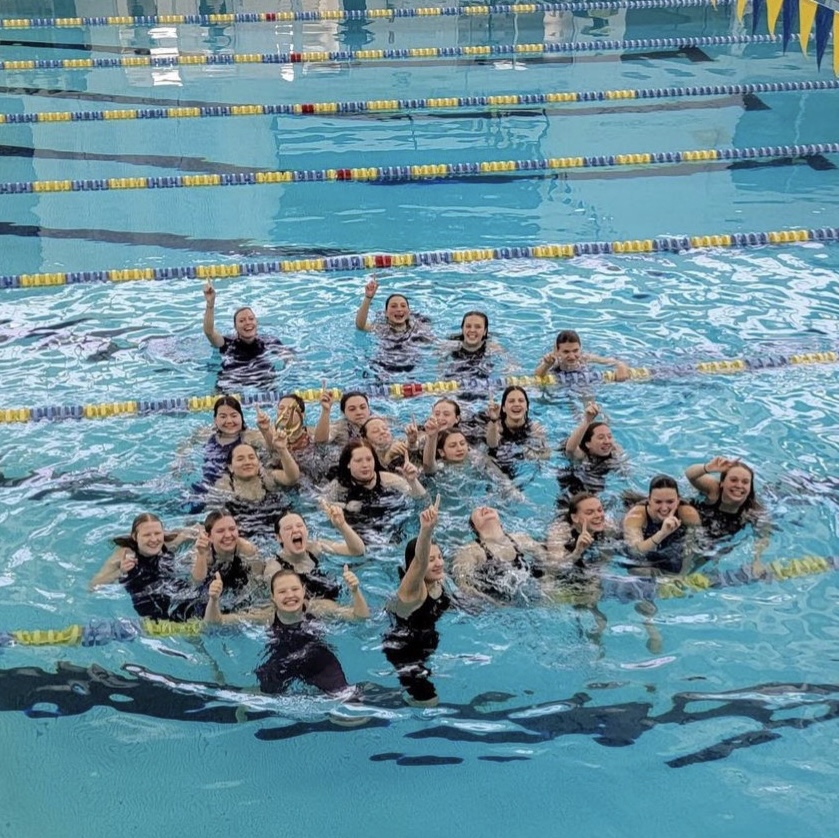 After just learning that they had won the conference title, head coach Megan Petrolje jumps in the water with her team

On Nov. 7, the Tritons swim team took the championship title at their conference. This is the second year in a row they have won the conference title. This year, the team was being trained by a new head coach, Megan Petrolje. Petrolje replaced former coach Jason Moore, who coached the Tritons for four years. When she is not coaching the Tritons, Petrolje coaches the Breakers in the off-season, which is a competitive club team run through the YMCA. The Breakers have a higher level of competition as they compete against teams all around the state of MI. The Tritons is a team that consists of girls from TCW, TCC, and St. Francis. The Tritons have a wider range of skill levels compared to the Breakers. Some of the girls from the Tritons also swim for the Breakers in the off-season, including sophomore Kira Adams. She loves swimming on both teams, but each team has special things that make swimming a unique experience.

Adams has been swimming for five years now, two of which have been with the Tritons swim team. Over the past year, she has made a lot of progress, which included some personal records.

“I’m very proud of my improvement this year, dropping two seconds in both events from trials to finals. Last year I was very sick and had a very hard time competing, so I didn’t do very well,” Adams said.

The improvements that Adams has made this season have allowed her to make qualifying times for the Michigan Interscholastic Swim Coaches Association (MISCA) meet and the state finals meet. MISCA was Nov. 9 at Calvin University. She and the team traveled to Oakland University for the MHSAA D1 state finals, competing in individual events and relays. This meet lasted from Nov. 18-19 In order to make it to such a high level of competition, the team must attend many other meets in an attempt to make time cuts. Sophomore Hannah Lantz has been on the team since she was a freshman and is very proud of the improvements she has made with her times and goals.

“This year I improved [my times] a lot. I think that I did better this year, but my motivation to [achieve] my goals [was] carried from last year’s conference meet. I think that the rest of the meets leading up to [the] conference were great,” Lantz said.

The conference is usually two days long and it is held at Manistee High School. The teams that compete in the conference are Traverse City, Manistee, Ludington, Cadillac and Fremont. The conference carries many traditions for the Tritons no matter who the coach is. On the first day of the conference, the girls wear the team competition suit that is worn to all meets beforehand. On the second day, they get to wear their tech suits if they have purchased one. Tech suits are racing suits that are tight to the skin, allowing for faster races. Another tradition is having a team sleepover at one of the girls’ houses after the conference. Aside from the competition, the girls on the team are able to make a connection with each other beyond school rivalry. This sleepover is also a way to celebrate accomplishments from the season regardless of the outcome of the conference meet. This year Lantz wanted to start a new, recurring tradition for herself and one senior each year.

“I let one of the captains, Amelia Naperala, cut my hair for me,” Lantz said.

If Lantz continues to swim with the Tritons she will let one senior shave her head each year as a fun activity and something memorable. For Lantz and other swimmers, being able to form connections with students from other schools in Traverse City is important.

“My favorite thing about being on the swim team is the friends I get to make, and how I can improve with them throughout the season,” Lantz said.